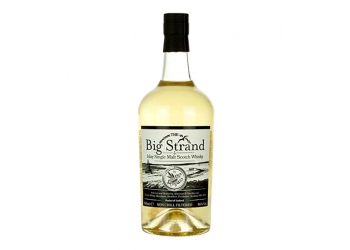 The Big Strand is a single malt scotch whisky from an undisclosed distillery on the Hebridean island of Islay. The product of independent bottler, Morrison & MacKay, it is named after the golden sands of Islay’s longest beach, which stretches for more than 7 miles from Laggan Point in the North to Kintra in the South.

Morrison & MacKay began life as John Murray & Co.founded by the Bartholomew family on the Isle of Mull in 1982. The young business specialised in the creation of fine liqueurs, enjoying great success with their Caledonian Cream brand. By 1996 they had opened the Scottish Liqueur Centre in Perth, beginning a long relationship with the city at the very heart of Scotland.

In recent years a range of mystery single malts have been introduced, hailing from undisclosed distilleries across the country. The Big Strand is joined by ‘Riverflow‘ from Speyside and ‘Kirkwall Bay‘ from the the Orkney islands.

Aroma: A mellow hint of peat on the nose.

Palate: The coastal theme continues on the palate, with a touch of bonfires too.