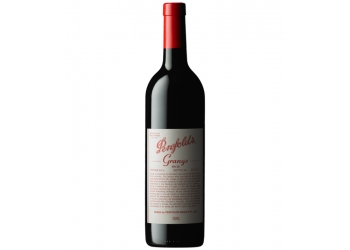 The original and most powerful expression of Penfolds multi-vineyard, multi-district blending philosophy, Grange is arguably Australia’s most celebrated wine and is officially listed as a Heritage Icon of South Australia. Crafted utilising fully-ripe, intensely-flavoured and structured Shiraz grapes, the result is a unique Australian style that is now recognised as one of the most consistent of the world’s great wines. With an unbroken line of vintages from the experimental 1951, Grange clearly demonstrates the synergy between Shiraz and the soils and climates of South Australia.

Grange was recently recognised as a First Growth in Liv-ex’s recreation of the Bordeaux 1855 classification.

Deep plush garnet throughout – from core to rim.

• Then outside – olive-leaf, cardamom, sage and thyme … “a stroll through a South Australian olive grove” … saltbush, acacia, dried and dusty bracken.

• To the cellar – fresh and familial lifted formic and barrel-ferment nuances. Followed by a return to reality:

Savoury, not fruity. Tastes/flavours remind of slow cooked beef ragout, chicken liver game terrine. Red liquorice also apparent. Integrated oak – spicy, almost ‘non-American’ oak … but it is. As it always is. A core of 100% new Quercus alba. Poised yet powerful. A balanced, tightly-knit and woven structural ‘tapestry’. Not to be constrained by dimension or frame. Tannins with attitude! Nonetheless respectful. Type? Slatey tannins … alluvial, silty (certainly not muddy!). Long and lingering – tactile impressions indistinguishably and slowly fuse/merge into an aftertaste memory. Until the next sip! A Grange to create new friends – this 2014 offering a subtly different structural mosaic; different tone and timbre.